“Are you Felicity Jones?”

This is how Felicity Jones begins most interactions with her fans, and they tend to stay this charming — because most of the people who come up to her in public are teenage girls.

“I seem to have mainly 16, 15-year-old girls coming up, saying, ‘I really loved you in Chalet Girl,’” she says, recalling her 2011 rom-com with Ed Westwick. “I’ve been very fortunate in that I’ve always had a very good response. I haven’t had any sort of negativity, or felt any toxicity.”

It’s one of many rewards for the sense of discipline that has governed her career so far. She’s resisted the allure of social media and the cycle of praise and backlash it inevitably brings. “I think Instagram can be amazing, particularly for fashion and for visual mediums,” she says. “I definitely know friends who have woken up at 2 a.m. to check the comments feed on their latest picture that they’ve got up. … It’s hard to have boundaries around it, and I definitely have, at moments, quite an obsessive personality. So I have to tread carefully.”

Jones, who grew up in the small village of Bournville on the southside of Birmingham, England, has had time to plot her life in the public eye. She got her start on the 1996 British TV movie The Treasure Seekers, alongside Keira Knightley, at the age of 12.
Jones is 37 now, and her latest movie, The Last Letter From Your Lover, marks a new high in her career — it’s her first time executive producing via her new production company, Piecrust, which she co-founded with her brother, documentarian Alex Jones. Not to be confused with the Infowars host, he has a list of credits that include serving as assistant editor on Martin Scorsese’s 2011 documentary George Harrison: Living in the Material World. Making movies together was their childhood dream.

Out this summer on Netflix, The Last Letter From Your Lover is an adaptation of Jojo Moyes’ 2008 novel of the same name. Shailene Woodley plays Jennifer Stirling, a 1960s woman whose impassioned correspondence with a man who is not her husband is discovered in the modern day by Jones’ character, Ellie Haworth, a journalist for The London Chronicle.

Jones may be best in soaring, adventurous, romantic films in which the protagonists are bedeviled by mean, nasty, earthly details. In 2011’s Like Crazy, her character’s passionate, international love affair with an American student (Anton Yelchin) is frustrated by immigration law and bureaucracy.

In 2014’s The Theory of Everything, she earned an Oscar nomination playing literature student Jane Wilde, whose beau, Stephen Hawking, may be able to master space and time — but can’t beat a disease that steals his control of his own body. Jyn Erso, Jones’ character in 2016’s Rogue One: A Star Wars Story, sacrifices everything to exploit some intergalactic small print. And as Ruth Bader Ginsburg in 2018’s On the Basis of Sex, she played a woman who needed to navigate granular legal points in the service of the grand goal of equality.

After The Treasure Seekers, she spent about a decade on British TV, playing Ethel Hallow in the television shows The Worst Witch and Weirdsister College, appearing with Tom Hardy on the series Meadowlands, and playing a young servant in a 19th century English country house in the appropriately titled Servants. In 2009, she appeared in the TV miniseries The Diary of Anne Frank as Frank’s older sister, Margot.

Her breakthrough into movies came with Like Crazy, and, also in 2011, Chalet Girl.

Her recent run includes The Argonauts, a 2019 on-screen reunion with Redmayne, in which she plays
the fictional but fact-based Amelia Wren, who seems at first to be colorful, costumed entertainer, but quickly proves to be a daring balloonist.
For the last year, she’s been focusing more on becoming a new mom than anything else. She and her husband, director Charles Guard, welcomed their first child into the world “very early on in the first lockdown, when we didn’t know what the hell was going on and how dangerous this virus was. It was a very, very unknown period of time,” she says. “Everyone was stockpiling various goods from supermarkets. It all got a little apocalyptic.”

Her pregnancy is well documented in 2020’s Midnight Sky, a sci-fi film directed by George Clooney in which Jones stars as Sully, an astronaut returning to Earth after a mission to one of Jupiter’s moons to see if it could become the new home to the human race.

“It was written into the story,” Jones says. “The character became pregnant, which I think is a first for a space film with a pregnant character. So it felt very revolutionary.”

Her role in The Last Letter From Your Lover marks a departure from her recent work, in that it’s grounded in the present day, lighthearted and funny. It’s something she’s wanted “for absolutely ages.”

The script is an adaptation co-written by Nick Payne, whose play Constellations caught Jones’ eye when it played at London’s Royal Court Theatre. Its quality, combined with her quick friendship with director Augustine Frizzell (Euphoria), let her know she was in good hands.

“It all felt like the stars were colliding in the right way,” Jones says. “I’d been doing more action, I guess —more serious work. And so it felt like a really good opportunity to play a contemporary character in London. And I liked her wit, and I liked the world that she was inhabiting.”

Jones was sitting down with Frizzell over a glass of rosé when they realized they both had the same vision for the movie.

“I’d been doing Aeronauts, where I’d been doing these stunts in various sorts of freezing cold temperatures,” Jones says. She remembers Frizell volunteering, “I really want to do something cozy.”

“And I just sort of yelped, ‘Yes!’” Jones says. “That’s exactly what I feel like doing. Something that feels romantic. Something that I would definitely watch myself.”
Jones says she was hooked on Last Letter by a scene in which Ellie dashes out the morning after a one-night stand — and politely advises the guy not to call her. It ended up being her opening scene, but that wasn’t the original plan.

“Interestingly, that scene was in a different place. It was much further into the story, and that was one of the edits,” she says. “It was a brilliant idea to put that at the front.”

The scene immediately establishes that the women in Last Letter have agency, and that they take what they want when they want it — and leave it when they don’t.

“You can’t get away with lazy portrayals anymore,” Jones says — which reminds her of recently rewatching 1987’s Fatal Attraction.

“It was so interesting watching it now. You have so much more empathy for the Glenn Close character,” she says. “Whereas obviously, when it came out 30 years ago, she was sort of demonized. It was fascinating
how the world has changed, and our expectations. The way we view female characters has, rightly so, fundamentally shifted.”

In her research preparing to play Ellie, she spoke with The Guardian’s Hadley Freeman for advice and insight into playing a woman journalist.

“She was a really great inspiration,” Jones says. “She really gave me such rich material to draw from in terms of playing a journalist. What’s involved, and the tenacity that you need, is fascinating. You’ve got to be able to — you can’t just go, ‘I’m going to give up, I haven’t managed to get that person to talk.’ You do have to just keep going and going.”

Jones continues: “Ellie is at a point in her life where she’s definitely looking for meaning. And I think
she’s at a bit of a crossroads where she’s going, OK, why am I doing this? What’s the point of this?’ And so that’s why she stumbled on that story, partly. … ‘I need hope that life is not just a series of events that don’t add up to anything.’ And by finding that story, I think it gives her hope in her private life that love endures. But also it gives her professional inspiration.”
After recognizing more profoundly over the past year how precious life is, Jones is ready to shake things up. Without worrying what anyone else will think.

“I’m always looking for the unexpected,” she says. “To do anything pure, you can’t worry too much about what other people want and expect. And I think to do anything original, you can’t go outside-in, can you? You’ve got to go inside-out. So I always have to follow that inner beat.”

Piecrust, she says, “was a very natural step, having increasingly been involved in development in the films that I’ve been doing.”

“When playing leads, often you do start having conversations about story and development. And I had studied English literature at university” — at the University of Oxford’s Wadham College — “so I’d always wanted to do other aspects of filmmaking.”

She adds: “It all felt like a very natural progression.”
Source 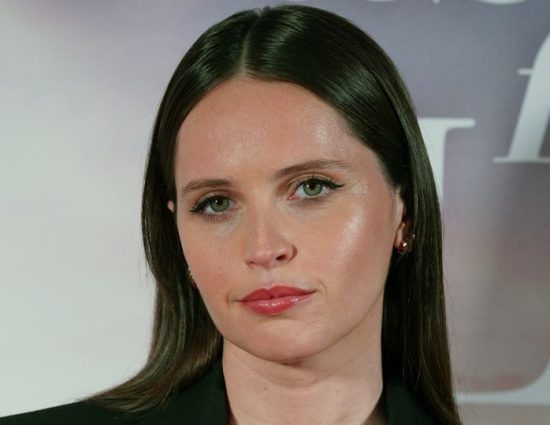